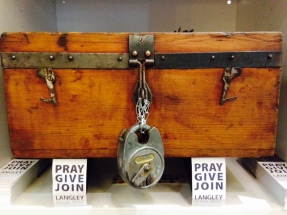 “Excuse me,” she said. “Would you like to find some treasure?” It’s such a simple question and a difficult one to say no to. Of course I’d like to find treasure. I mean, who wouldn’t, right?

This is Langley House Trust’s new approach to engaging the public in their work at events and conferences around the country.

Gone are the exhibition stands with pictures of people in prison, gone are the tables full of brochures, gone, even, is the Langley House Trust branding. The new stand is white. Nothing on it. Nothing.

In front stands a white plinth, plain but for the antique wooden strong box that sits near the top, secured by its large old padlock. And as the Langley staff member dangles a large jailer’s ring of vintage keys and invites me to have three goes at picking the right key, well, it’s pretty irresistible. As is her next statement. “This is what we do every day,” she tells me. “But instead of wooden boxes, we search for treasure inside people who are more challenging to work with than that padlock, and more rewarding than the contents of that box.” That’s it, I’m hooked, snagged by a clever lure and reeled in by expert fishers of men!

By the time I’ve failed in my attempts to find the right key I realise that this whole thing is a metaphor for the work of Langley House Trust. The staff and volunteers seek the treasure within the offenders that they work with. They try every key at their disposal to find the one that will help those in their care to open up and to see for themselves that they are valued and have inherent worth, and then to invest that treasure to secure a new future full of joy and hope.

Whatever feelings I might have had about offenders – before I got sucked in by the desire to see if I could open the box – are gone as I realise that my beliefs have been formed more by the media than my own deeply felt values about people, their worth, the mistakes we make and the hope for second, third and fourth chances. It’s as well that I didn’t know who these people were and who they worked with as I probably would have just walked past and said, “No, thank you”. But here I am, not just feeling better informed but having had some basic humanity reignited within me and making a decision not to turn my back any more on this section of our society, and to get involved.

This week’s blog is from Gareth Barton, Director, Spread Communications

Our new Annual Review is coming… come back soon to learn more about our work and the impact we are having on people’s lives around the country as we consider the theme of ‘Authentic: keeping it real’.  ...