I read Michael Gove’s inaugural speech on prisons with great interest – in fact, many of his sentiments about the shortcomings of the current system would be shared by most of my colleagues. I wish I knew a bit more about the speech: in the light of the austerity to come, how realistic are his ambitions and aspirations for a system that is, in his own words, “failing to work as it should”?

Research points to two huge problems in the prison estate…

This question aside, I was particularly interested in two issues raised in his speech. The first was the need to modernise the infrastructure of prisons in order to reduce overcrowding and increasing levels of violence and drug taking.

I am not a prison expert and would never claim to be. I do, however, spend a lot of time researching the impact of prison on the lives of those that we support. This can be in the form of reading my favorite go-to statistical source – the Bromley Briefings – or from conversations with men and women who have experienced the prison system first hand. I have an enormous respect for those that govern and work in the prison system but all of the research points to two huge problems:

Michael is new to the role but has promised to make all decisions considering the evidence. Only time will tell whether this will play out but we all support him in this aspiration. We know from our work creating therapeutic communities on prison wings through Kainos Community, how much of a difference it can make, not only to the likelihood of reoffending amongst participants but also in reducing violence and anti-social behavior on the wing. A winning situation for all concerned. Funding to create such communities in every prison in the estate would be a great start to realising a prison system that actually reduced reoffending and safeguarded the men and women who risk themselves daily to manage them.

“There is a treasure, if only you can find it, in the heart of every man.”

My second nugget of gold was the quote from Churchill with which Michael Gove chose to contextualise his speech: “There is a treasure, if only you can find it, in the heart of every man.” 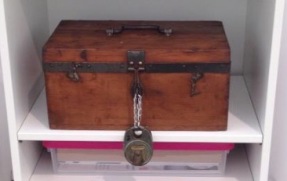 This year we are promoting the services that we run at various events up and down the country. For this purpose we call ourselves ‘Treasure Hunters’ and we are travelling with a large locked trunk that people have to try to find the right key in order to open it and access the treasure inside. Sometimes it takes many attempts – people may not find the right key to start with. Some people need to persist and make multiple attempts before they find a key that fits. The metaphorical link to our work is a strong one.

The belief that every person has value and worth lies at the heart of all that we do. That is the key to reducing re-offending, that is the source of true success.