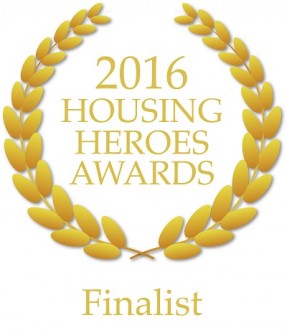 Langley House Trust’s Care Team has been recognised for their outstanding effort by being nominated for a Housing Heroes Award, run by Inside Housing.

They beat stiff competition to be shortlisted for the ‘Support and Care Team of the Year’ category.

The awards celebrate the “unsung heroes” of the housing world. They look for excellence, commitment and dedication in teams who play a vital role in the housing sector but whose contribution isn’t always noticeable upfront.

Speaking about the nomination, Stella Wint, Acting Head of Care at Langley, said:

We are really pleased to have been shortlisted for this prestigious award. The Care Team has met and over-achieved on its objectives throughout a changing and challenging time and has shown consistent determination and tenacity.

Our role involves making sure that some of the most complex people in the Criminal Justice system get the support they need when leaving prison so that they can go on to live crime-free. It’s a great accolade to be recognised for this but most importantly, to be part of creating real change in people’s lives, many of whom have been in prison and other institutions for decades.

The Support and Care Team of the Year is one of eleven categories at the awards, including Inspirational Leader of the Year and a Lifetime Achievement in Housing.

The Housing Heroes awards were only introduced in 2009 but have become increasingly popular. Over 700 people attended last year’s awards, including housing industry figureheads and well-known people from leading trade associations and government.

The results will be announced at a black tie reception on Monday 27th June in Manchester. The awards ceremony will be hosted by broadcaster, author and former MP, Gyles Brandreth. The awards take place directly before the Chartered Institute of Housing 2016 annual conference which is the largest gathering of housing professionals in Europe.