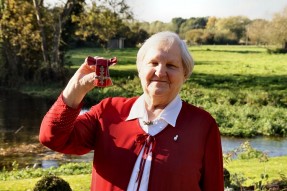 Val Dodsworth, a former staff member of Langley House Trust, has been awarded an MBE for her services to homeless people and to the community in Norwich.

At 78, Val has spent most of her adult life working with or supporting disadvantaged individuals, both personally and professionally. She first started working with ex-offenders when she joined Langley House Trust in 1971 under the leadership of John Dodd, our first Director General.

After a career as a Probation Officer, Val became a member of the chaplaincy team at Norwich Prison. With increasing concerns about the welfare of prisoners on release, she set up ‘House of Genesis‘ with a colleague, opening up her home to begin with as a stop-gap for homeless men to stay after prison. The House of Genesis now has two homes, providing between 9-15 months support for men leaving prison who would otherwise be homeless.

In Lord Dannatt’s speech, Val was also praised for her unfailing commitment, enthusiasm and selflessness. We are delighted that her years of selfless service have been recognised.

For more information on the House of Genesis and their support, click here.