Langley is delighted that Justice Data Lab results show a positive impact of our interventions on reducing reoffending. 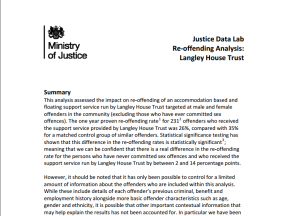 The Ministry of Justice introduced the Justice Data Lab in 2013. It measures the hard outcome results of the voluntary sector when working in Criminal Justice.

Langley is delighted that the findings showed that the one year proven re-offending rate* for the 231** offenders who received Langley’s support was 26%, compared with 35% for a matched control group of similar offenders.

This underlines the fact that Langley makes a significant difference to people’s lives. While individuals are in our housing, we have a 2.6% reconviction rate.

The results were recently re-run, using Offender Assessment System data (OASys). The OASys is a probation assessment tool which is used to understand the risks and needs of offenders linked to their criminal activity. This provided a more robust picture of the profile of the cohort and included needs such as housing, drugs and alcohol use. The results returned showed similar results to the earlier reports and gave more confidence about the comparison group used. Langley is the first organisation to use the OASys to calculate a more accurate comparison group. For the methodology, click here.

The full report – including statistical clarification – can be found here.

**231 individuals were matched from a cohort of 775 individuals, whose details were sent to the Justice Data Lab, as described on page 3 of the full report.

***The p-value for this significance test was 0.005. Statistical significance testing is described on page 9 of the full report. All results exclude any individuals who had committed sex offences because of different patterns of offending.