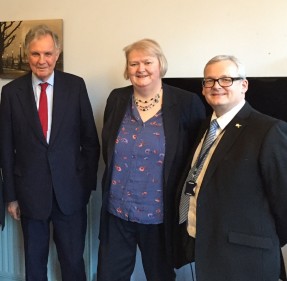 Langley patron, Jonathan Aitken, received a warm welcome by one of our London projects last week.

He heard first-hand from men about life after prison and their experience of learning to live crime-free.

With his trademark grace and easy manner, Aitken spoke at length with staff and residents. Topics ranged from the impact of the proposed Government changes to Housing Benefit and the daily challenges that residents face as they start afresh.

One resident spoke  candidly about how he had gone from being in prison to volunteering for a local charity, ‘Lives not Knives’ which educates young people about the dangers of knife crime.

Aitken has been a patron of Langley House Trust since the Trust merged with Stepping Stones in 2012, a local London charity which provided housing and support to men after prison. His own experience of imprisonment has shaped Aitken’s involvement in Criminal Justice reform where he has since called on the Government to make sweeping changes to improve the services and state of prisons.

The London project Aitken visited provides safe accommodation to men leaving prison. It also links them with specialist support so that men can overcome issues which contributed to their offending – such as addictions, mental health issues and family breakdown.

It is part of Langley’s aspiration to have a ‘Langley in every town’, providing specialist housing and support to people leaving prison at their point of need so that they don’t go on to reoffend. Our reconviction rate is just 2.6% whilst people are in our housing.

This type of housing project would be at risk though under the Government’s proposed changes to Housing Benefit. The loss of 82,000 specialist homes would not only affect ex-offender projects, but also women’s shelters, those fleeing domestic violence, veterans, the elderly and those with dementia. To support our campaign to stop 82,000 specialist homes being lost, click here.

One staff member commented: “It was a thoroughly enjoyable visit and our residents laid on an admirable spread for Jonathan. It was a privilege that he could take the time out of his busy schedule to see the work that we do on the ground.”