Langley House Trust was one of over 100 organisations which attended the Crisis conference this week – ‘Homelessness: the next five years.’

Crisis, the national charity for single homeless people, brought together speakers and delegates from Government, the Third Sector, Education and Business to consider key issues regarding homelessness over the next 5 years. These included the lack of affordable housing, standards within the Private Rented Sector and the impact of the welfare reform on homelessness. 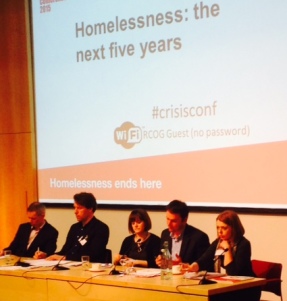 Crisis has funded Langley’s Luton Private Rented Sector scheme – an innovative housing scheme for offenders – for the last 3 years. The scheme has helping to reduce homelessness and reoffending as lack of secure housing is often a key factor in reoffending.

Crisis-funded schemes have helped to create over 8000 tenancies in the last 3 years for single homeless people, with 90% of those being sustained.