Home › News and events › Langley Bake Off a Success 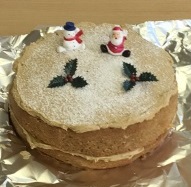 Inspiration from the Great British Bake Off led to our very own Langley Bake Off!

On 8th December 2015, 30 residents and 10 staff gathered to show off their baking talents.

The Bake Off gave residents the chance to learn new skills and develop their confidence and self-esteem as part of their journey to live crime-free. The categories included most artistic cake, best representation of the Christmas story and best newcomer. 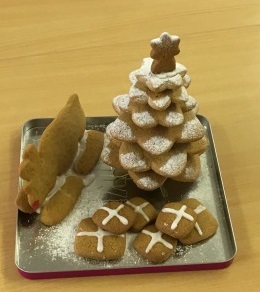 The national Langley Bake Off followed a local project Bake Off earlier this year, when four projects joined forces to have a regional Bake Off. One resident, Jim*, who had never baked before, was delighted to win the regional event. This inspired him to enter his own Christmas recipe in the national Bake Off which impressed the judges.

Another resident in his 70s submitted his first ever cake bake. Having spent over 50 years in prison, he had also never baked before.

The judging panel was made up of central project staff and residents. In true Mary Berry and Paul Hollywood style, they assessed the baking on appearance, taste, texture, innovation and skill. Our Chair, Malcolm Hayes, also got involved in sampling and tasting the entries.

Our Lancaster project overcame the odds to win the best representation of the Christmas story, despite power cuts after Storm Desmond hit Cumbria and Lancashire.