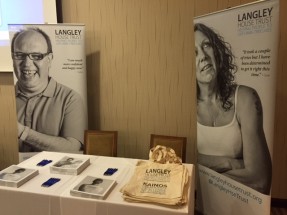 Held in the delightful surroundings of Wyboston Lakes, the conference was attended by almost 200 professionals, including from the Police, National Probation Service and Community Rehabilitation Companies.

The focus of the conference was ‘Responding to the Challenges of Change’ – reflecting on the largescale reform in Criminal Justice through Transforming Rehabilitation.

Langley’s workshops raised key issues around accommodation and housing, including the shortage of accommodation, the worrying impact of Government proposals which would reduce supported housing* and innovations to try and overcome these issues. We shared lessons from our Luton scheme which has housed over 100 of the most chaotic and complex offenders in the Private Rented sector since 2012.

The conference highlighted the effectiveness of IOM teams in managing and making a difference with complex offenders. Since its inception, IOM has adopted a multi-agency approach, bringing together different partners such as housing, health and education to work alongside Police and Probation when managing offenders in the community. The model works because of its ability to combine the strengths of different partners and provide a coordinated approach. 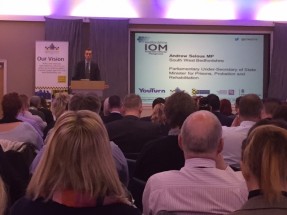 Andrew Selous speaking to the conference

Speakers included Andrew Selous, Minister for Prisons, Probation and Rehabilitation and Olly Martins, the Bedfordshire Police and Crime Commissioner. Revolving Doors inspired the audience with a first-hand account of a service user’s journey from Paula. She shared about the successes and failings of the support that she had received when trying to exit crime, domestic violence and drugs.

The conference will be held again next year and will build on progress made.

*Accommodation for offenders on release from prison is currently under threat through Government proposals to change how Housing Benefit is funded. Current proposals under the Welfare Reform and Work Bill will see the loss of 82,000 specialist homes in supported housing. These provide vital accommodation for offenders – so that they are supported to live crime-free rather than go on to reoffend – but it will also affect accommodation for victims of domestic violence, the elderly and veterans. To find out more and to sign an online petition, click here.