Langley House Trust has won the Care and Support Provider of the Year Award at the 24Housing Awards 2019! 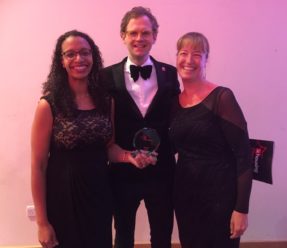 The 24Housing awards are highly regarded across the housing, support and care sectors and were founded in 2013. Langley entered the 24Housing Awards for the first time in 2019.

The judges considered value for money, best practice, successful outcomes and originality when choosing the winners.

Around 500 people gathered together for the awards ceremony which celebrated “outstanding organisations and individuals who… demonstrated their ability to thrive in the new housing landscape.”

The award result was announced at a packed awards ceremony in Ricoh Arena, Coventry in early October 2019.

Langley was pitted against a number of larger, well-established housing associations in the Care and Support Provider of the Year category. These included Progress Housing and Plus Dane Housing, both of which have several thousand units of housing stock. By comparison, Langley manages around 500 beds.

Nevertheless, the success of Langley’s impact on helping people to live crime-free after prison and its broader social impact helped to secure the award.

The award category was sponsored by the Longhurst Group, a leading housing group and UK top developer in the Midlands and East of England.

Langley previously won Charity of the Year (for larger charities) in the Charity Times Awards in 2018. Langley also secured an Investors in People Gold award for the second time in a row earlier this year.

I am thrilled that we have won such a prestigious award. It is testament to the dedicated work our people put in every day across the Trust. The award is all the more special to us as it underlines the transforming work we do with our clients. All of us are passionate to see lives changed for the better.”

We are proud to launch our 2021-2022 Annual Review – an opportunity for us to share Langley’s journey this past year by walking you through some of our clients’ stories. Our theme this year is ‘Authentic: keeping it real’. We are looking at the different ways our services deliver support in an authentic way, recognising that […]...