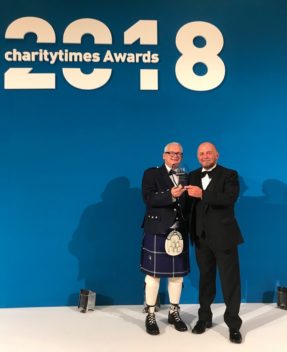 Langley House Trust was delighted to win Charity of the Year (income over £5m) in the Charity Times Awards last week.

The award was announced at a packed London ceremony on 3rd October 2018. Hundreds of people gathered at the award ceremony at the Westminster Park Plaza to hear the results.

Tweeting about the event, David Wm. Reynolds said: “A huge thank you to our outstanding staff, volunteers and stakeholders that helped Langley House Trust to be awarded the Charity Times Award Charity of the Year – recognising the hard work, dedication and commitment of many, many people. Truly so very proud to work for this organisation.”

Speaking about the award, CEO Tracy Wild, said: “Winning Charity of the Year – especially as we celebrate our 60th year – is a great achievement. This is down to the hard work and dedication of all our staff members and volunteers and their unfailing commitment to our mission of changing ex-offenders’ lives for the better.”

The awards attracted hundreds of high quality entries. These were judged and evaluated by an expert independent judging panel.

The Charity Times Awards recognise excellence across the UK charity and not-for-profit sector. In its 19th year, the awards are held by the Charity Times Magazine, a leading publisher for the charity sector.

Since their inception, the awards have aimed to promote and raise the profile of the charity sector. This includes supporting higher standards across the field and recognising both individuals and organisations who contribute exceptionally to the field.

The Charity Times Awards also celebrate the best stands of leadership and professionalism in the charity sector, including cross-sector partnerships and charity partnerships with the commercial sector.