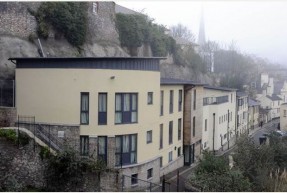 The Leonard Stocks Centre, our flagship homeless hostel in Torquay, celebrated its 8th anniversary in December 2016.

The hostel on Factory Row supports hundreds of homeless men and women each year. It continues to be a vital lifeline in reducing homelessness in Torquay.

The hostel has made a visible impact on reducing homelessness in the area, helping to address issues such as addictions, mental health, family breakdown and trauma. A homeless hostel has been on the site for 25 years but it was only eight years ago when the custom hostel was built.

I don’t know what I would’ve done without the support of the staff. They’ve been like family to me and have helped me to get back on my feet again. I never thought I’d be able to get a job again because I was in such a mess.

I’ve made my family proud again by sorting myself out, getting my own flat and finding a decent job. The hostel was the best thing to happen to me.

The centre is owned by Langley House Trust and is co-run with another charity, Shekinah. Like Langley, Shekinah runs recovery-focused services, helping people to address homelessness, addictions, mental health and offending. The two have worked in partnership since the Council recommissioned the homelessness service in 2015.

The centre is well supported by the community, particularly by the ‘Friends of Factory Row’. They have played a key role in keeping the centre running at crunch times, especially when the hostel has been faced with closure.

Nick Pannell, Chairman of the Friends of Factory Row, said:

If you go back 25 years the hostel was housed in a converted warehouse with a simple 12 bed dormitory where only homeless men could be accommodated. Factory Row was a ramshackle street in dire need of redevelopment.

Today we have a purpose-built, well-managed hostel with 24 bedrooms where men and women can be accommodated. Women now average a third of the hostel’s residents. It is 25 years of amazing commitment from the local community and churches which set up the hostel in Factory Row and Langley and Shekinah, working with Torbay Council, to create a flagship project.

Thousands of lives have been touched by its work, overwhelmingly local people.