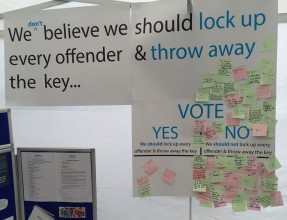 Langley House Trust raised eyebrows at Greenbelt 2016 with its provocative poll asking whether every offender should be locked up and have the key thrown away.

The poll was designed to provoke reaction and spark debate.

Amidst the sunshine, showers and mud, festival goers braved the conditions to engage in the question of rehabilitation and think about the best solutions for dealing with criminals, rehabilitation and how to create a safer society.

Over 84,000 people are held in prison currently, a 92% rise from 1993. Historically, however, prison has a poor record for reducing reoffending with 46% of adults being reconvicted within one year of release.* Stats show that community based sentences and services are often more effective in reducing reoffending.

Unsurprisingly, the majority of festival goers voted against locking up every offender and throwing away the key, recognising that a second chance and the right support were part of the solution for breaking the cycle of crime.

One festival goer said: “Everyone can make bad decisions but everyone should get a chance to change.” Another person said: “No: because inside everyone is someone waiting to be more.” One teenager wrote: “Yes and no – because it depends [on] what they have done and if they learn from their mistakes and if they repent and say sorry.”

The arts, faith and justice festival attracted thousands of visitors over the course of the August Bank Holiday weekend. The festival took place at Boughton House near Kettering, its relatively new home after a long-standing commitment with Cheltenham Racecourse.

Greenbelt has been running since 1974 and is well-known for hosting controversial debate across arts, faith and justice issues. Key speakers who spoke on issues affecting society included the Archbishop of Canterbury, Justin Welby and Terry Waite, who was held in captivity whilst working for the freedom of hostages in Beirut.