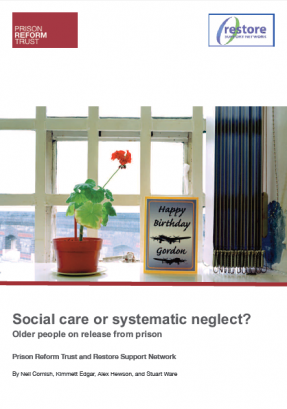 A report from the Prison Reform Trust and the Restore Support Network has called for sweeping change in how the Government supports older people leaving prison.

The report found that older offenders had inadequate support to meet their health and social care needs once they left the prison walls.

Older people also struggled with reintegrating into society, with some offenders preferring to be imprisoned again, rather than face loneliness and isolation in the community.

The report, entitled Social care or systematic neglect?, has urged the Government to review its approach and create a cross-government, national strategy to properly meet the needs of older offenders – including their health, social and rehabilitative needs.

Langley House Trust has long recognised the need for increased provision for older offenders leaving prison. One of the tragedies of the prison system is ‘cell blocking’ – where offenders who have served their tariff are not released because there is insufficient housing and support in the community to support them.

Without systematic change, the situation could become worse. The older prison population is the fastest growing prison population – with three times as many people aged 60 and over in prison today compared to 15 years ago. Eight out of ten older people in prison have a serious illness or a disability, putting increased pressure on the prison estate and community services to make adequate provision for them.

“It is vital that the right support is given to older offenders leaving prison. The social isolation and health issues they face is often more pronounced which increases the risk of crime – it is concerning that some older offenders will commit crime to end up back in prison because prison is the only life they know.”