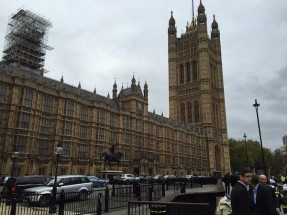 About 50 people gathered at the heart of Parliament on 1st March 2016 for the Conservative Christian Fellowship (CCF) Prayers for the Nation.

The evening raised key issues on prisons and offender rehabilitation and is part of the CCF’s commitment to raising awareness on key topical issues.

Langley was featured alongside Andrew Selous, Minister for Prisons and Rehabilitation. Other speakers included the Rt Hon Dominic Grieve QC and John Patience, CEO of the Nehemiah Project, which helps recovering addicts.

Samantha Waterton from Langley highlighted the essential need for accommodation as the cornerstone of effective rehabilitation. She spoke candidly about how this was under threat due to Government proposals. Legislation in the Welfare Reform and Work Bill would close 82,000 specialist homes – 41% of supported housing – increasing homelessness and the risk of crime.

Selous spoke with customary directness. In his words, he stated that the focus of the Ministry of Justice was to ‘prevent victims by changing lives.’ Echoing Justice Secretary Michael Gove’s comments that people’s lives should not be measured by their worst moment, he highlighted his key priorities for breaking the cycle of crime. Amongst them was a focus on creating strong families, improving education opportunities in prison and the lofty aspiration for every person entering prison to have a job to go to. Currently 20%-25% of prisoners do.

Selous applauded the work of Langley, the Nehemiah Project and the 1300 charities that work in the Criminal Justice sector, supporting prisoners and ex-offenders. In an unexpected moment of humour, he spoke about being an ‘ex-child’ and that whilst technically true, it wasn’t the best way of describing him. Equally, he recognised the limitation of describing people as ‘ex-offenders’ without focusing on a new identity for the future.

Langley has worked with people coming out of prison since 1958, helping them to live crime-free. We currently have a 2.6% reconviction rate whilst people are in our housing, showing that ‘change is possible’ – a theme that featured in the evening.