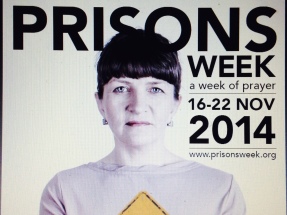 Christians are being called to join a week of prayer to support and raise awareness for all those affected by the criminal justice system. Prisoners, their families, victims of crime and prison staff are among those who will be prayed for (between 16-22 November) as Prisons Week celebrates its 40th year.

This year’s focus for Prisons Week is building hope. Established in 1975, Prisons Week is run by a broad alliance of Christian denominations and leading faith-based charities working in the criminal justice system.

With prison populations more than doubling in the last 20 years, suicides rising 69% in the last year and a reported 30% decrease in prison officers in the last three years, these are uniquely tough times for all those involved in the criminal justice system.

A Prisons Week spokesperson said: “The Prison Service is facing huge challenges with record populations of more than 85,000 and many prisons suffering from overcrowding.

“There has also been a 37% surge in serious assaults on prison staff working in these demanding conditions. The figures speak for themselves and we need to reduce the levels of distress and despair within the system ‒ by building hope.

“Each year, during the week that follows Prisons/Prisoners Sunday, the Christian community is asked to think about and pray for a different group affected by imprisonment and those working with them.”

Special services will be held throughout the week, including at Rochester Cathedral, on Sunday 16 November at 5pm where Rt Revd James Langstaff Bishop of Rochester and Bishop to Prisons will preach. Prisoners, ex-prisoners and local volunteers will also take part, against a backdrop of art created for the occasion by HMP Lewes prisoners.

There will also be a seminar about the over-representation of black people in prisons, at Westminster Central Hall on Friday 21 November, hosted by Churches Together’s Bishop Joe Aldred and Free Churches Faith Advisor to NOMs and Chaplain Rev Bob Wilson.

Regional and local services will take place across the country in churches, prison chapels and prayer groups beginning on Prisons/Prisoners Sunday 16 November and continuing throughout the week.

Further information and resources including a video, prayers and a new hymn written by Timothy Dudley-Smith can be found at http://www.prisonsweek.org/